What does ODD mean in a child? 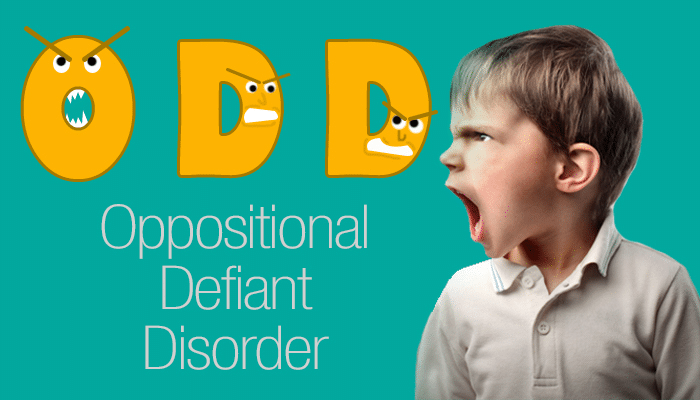 What is ODD(oppositional defiant disorder)?

OPPOSITIONAL DEFIANT DISORDER  – Children’s who often argue with their parents or authoritative figure and denies to follow and rules and regulations actively defies or refuses to comply with anyone, primarily parents the peers or the teachers. People ignore these signs of oppositional defiant disorder and term it as “child’s normal behaviour”, but the normal children’s occasionally have an outburst of frustration and disobedience, but a persistent habit of irritation and opposition against any authoritative figure is a symptom of the oppositional defiant disorder.

Most people can’t distinguish between these, which is wrong on so many levels and later, when this gets severe, no one wants to take the blame for ignoring the symptoms. A person with the oppositional defiant disorder is more troubling to others than themselves. It is a chronic disease and can last for years or even lifelong.

How common is oppositional defiant Disorder?

“ODD typically begins by the age of 8. It is calculated that 2 to 16 per cent of kids and teens have ODD. In younger children, ODD is more common in boys; in older children, it occurs about equally in boys and girls.”

There is not just one symptom that points towards ODD; there needs to be a pattern of multiple symptoms occurring over a while.

Children with ODD display behaviour that are challenging for parents and educators. ODD most commonly affects children and adolescents. The symptoms include;

The disorder in adults are often difficult to diagnose because many of the Systems can overlap with anti-social behaviours, substance abuse or any other disorders. The symptoms of ODD in adults include;

The oppositional-defiant disorder varies in severity:

There are no known clear causes of the oppositional defiant disorder. Contributing causes may be combinations of many. These include;

Early treatment is essential for people with ODD. Teenagers and grown-ups with non-treated ODD have heightened danger for depression and substance disorder. Treatments options include;

INDIVIDUAL COGNITIVE BEHAVIORAL THERAPY: A psychologist will work with the child to improve:

Can oppositional defiant Disorder be prevented?

When to see a Doctor?

The child isn’t likely to see any problems with their behaviour and probably complain about unreasonable demands or blame others for the problems. But if the child is showing signs of ODD or any other disruptive behaviour or you’re concerned about your ability as a parent, seek help from a psychologist or a child psychiatrist with expertise in the field.

The oppositional defiant disorder is disruptive behaviour in the child when they defy to deny to follow any rules and regulations by any authorities figure such as parents or teachers. Its symptoms start showing early from the age of 8; ODD is a chronic disease and can be for years and even for life long if not treated properly. There isn’t an apparent cause of ODD, but the genetics, environment around a child and biological problem related to the brain play an ample amount of role in it. There are many treatments available to help the person struggling with ODD, such as peer groups, family therapies and medications. Always seek medical help to help the person struggling with ODD.